skip to main | skip to sidebar

Stay tuned for more info about the upcoming LA Times Festival of Books 2011.
Posted by Kevin Glavin at 4:12 PM No comments:

It's funny, how when Joyce's classic novel Ulysses first came out
in 1922, few people knew what to make of it. While they sensed
brilliance, they also felt frustration with this new form of art.

For instance, check out this early review from the New York Times.
The professor, Dr. Joseph Collins, clearly appreciates Joyce's genius, calling Ulysses "the most important contribution that has been made to fictional literature in the twentieth century."

At the same time, he laments at the work's abstruseness:

"...Moreover, he is determined to tell it in a new way. Not in straightforward, narrative fashion, with a certain sequentiality of idea, fact, occurrence, in sentence, phrase and paragraph that is comprehensible to a person of education and culture, but in parodies of classic prose and current slang, in perversions of sacred literature, in carefully metered prose with studied incoherence, in symbols so occult and mystic that only the initiated and profoundly versed can understand -- in short, by means of every trick and illusion that a master artificer, or even magician, can play with the English language..."

Well, despite the book's Delphic ambiguity, the professor turned out to be right. Ulysses did go down to become one of the best books of all time, at least according to this list from the Modern Library.

It makes one wonder about the artist's aesthetic, as Joyce explores in his first novel, Portrait of the Artist as a Young Man. Should an artist follow a Kantian perspective, focusing on "art for art's sake" and disregarding all else (including $), except one's own Muse? And if the work is accomplished to the artist's wishes, is he "successful" in realizing his vision, regardless of outside understanding and recognition?

Check out my review of James Patterson's newest novel Tick Tock: http://tiny.cc/lsokr
Posted by Kevin Glavin at 9:33 PM No comments:


Hello! I'm the author/editor (I must apologize for this posting--I'm not quite sure how else to link my goodreads profile to my novel). What did I think of the book? I loved it! It was so much fun to write; I hope you have as much fun reading it. If not, it helps make a good fire:)

I'm a bit late to this goodreads site, but I'm glad to have found it and gotten started.

For more info, feel free to check out my website:

Thanks so much and have a wonderful 2011!

P.S. Please note that there are some technical issues with the Google eBooks version that are still in the process of being corrected (for some reason, their converted ePub omitted all apostrophes, quotations, accents, and umlauts). All other eBook and print versions work fine:)

View all my reviews
Posted by Kevin Glavin at 4:09 PM No comments:

More on the Future of Publishing? 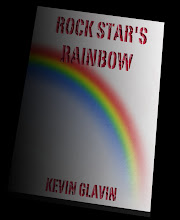 Even a murder couldn't cover up this celebrity scandal.

Kevin Glavin
My ancestors hail from the Emerald Isle; I hail from the Windy City. After receiving my BA in English and MAT in English Education from the University of Iowa, I sashayed like my forefathers--westward...